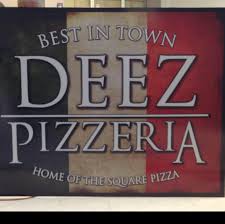 Hello my fellow Divettes!  Annod here to bring you a rating on a new place in Northern Lower Michigan that is out of this world, called Deez Pizzeria.  I have to tell you I’m not a big fan of pizza, either the sauce is too much or not tasty and the cheese isn’t melted the way I vision pizza. We had a graduation party to go to with one of my good friends whose nephew was graduating.

When it was decided that we all were going to a pizza shop after the graduation, I just sighed. No good food for me!!! Gini and Suse were happy with the choice.  It was a road side pizza shop called DEEZ PIZZERIA and it stated on the menu THE BEST IN TOWN. Not only did it have pizza (which I will get to in a minute) but they have specialty pizzas, salads, calzones, subs and dinner options of Chicken Alfredo and Cheese Ravioli etc.   Salads and chicken wings with quite a few dipping sauces were also on the menu. There was so much to choose from.

Our group had 13 people and if it would have been any more crowded, it wouldn’t have accommodated all of us.  The pizza’s (group choice) was the round pizza with pepperoni, Italian sausage, green peppers and mushrooms. There was one part of the group that ordered the cheese bread (16 pc. for $8.00) and a specialty pizza with ham bacon and pineapple (personal pan pizza up to large.) Prices were ranging from $11.25 to $18.50.) The cheese bread came out first and the owner of the cheese bread had to share (she didn’t know that would happen!) The bread was cheesy and the bread part was cooked to perfection with Mozzarella and Parmesan cheese. 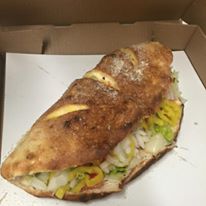 About the time that the cheese bread was done, the pizzas came out. Our friends that wanted a personal pan pizzas were served. One was without sauce (she didn’t know what she were missing because the sauce was amazing) and the other was with sauce and pepperoni ($10.25 with cheese and to add a topping was an extra $.75)

This is not your ordinary chain pizza, this is pizza you would get from an authentic pizza shop.  Our round pizza (square option available) came out steamy hot, crust was crispy, and the cheese was stringy like pizza should be.  I changed my mind once I tasted the pizza. The sauce had a genuine Italian taste to it, the toppings were fresh and tasty, and the pepperoni and sausage had the taste of real Italian spice.  I looked over at Suse and her eyebrows were raised and Gini was on her second piece. 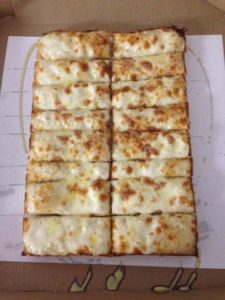 What a great surprise to have a pizza that was so delicious. Don’t get me wrong I still don’t like pizza but I would call them to have them ship it to my house back home. (I wonder, would they do that?)

Also, which we thought was great, was the “Family Bucket.”  It comes with House Salad and Garlic bread, your choices are Meat Sauce ($19), Chicken Alfredo ($24) and Alio E Olie ($17).  This is a traditional Italian pasta dish coming from Napoli, with Garlic and Olive Oil. I don’t know about you but there are times I do not want to cook. They also have Hot Fresh Slices all day, $2.00 plus tax. They have desserts of Cannoli’s and Cheese cake (prices vary) to add cherries $1.00.

The only issue I saw was with the drinks we received. Most people wanted water and the water came from a pop machine that you would see at a McDonalds. We asked if they had any pitchers that we could have at the table and they didn’t have them. That is a small complaint, and insignificant when your tasted the food. 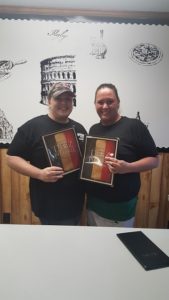 We met the owner DeAnna Wilson along with Jessica and our server Daniel.  He kept up with us pretty well. This establishment has been open since May, 2016. I am so excited to go back up North just to try all the other items they have on their menu, especially if it’s as good as the pizza.

They also has a FACEBOOK page called DEEZ PIZZA  We also found out that DeAnna used to live in Eastpointe and it seems like such a small world.  Deez  Pizzeria is located at 2163 Ryno Rd., in Luzerne, MI, 48636, and the phone number is 989-826-2267.  Great job Deanna and crew.  I now have a place to go if I have a craving for pizza.