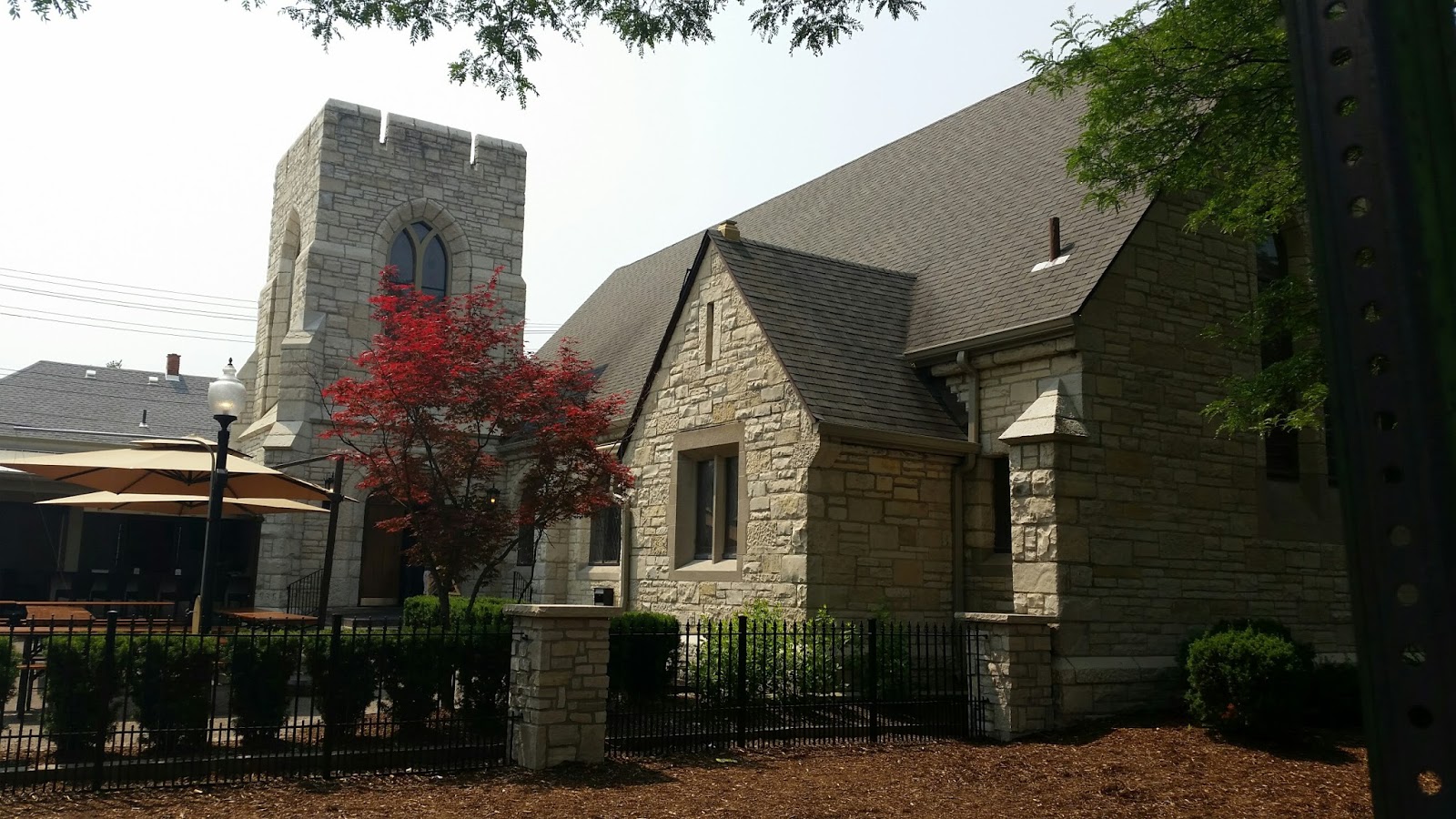 The DIVAS have gone German. While in the Grosse Pointe Park area of Michigan, we came across an old church at the corner of Kercheval and Lakepointe that had been transformed into a proper German biergarten, the Atwater in the Park microbrewery, and decided to stop in.

We passed through the public seating outside, very reminiscent of a Bavarian beer garden. Upon entering the dining room, we noticed the former altar, occupied by brewing equipment. The bar area is the whole sanctuary with 40 taps underneath a cork-lined ceiling. Stained glass windows take up the front wall in the dining room and “pews” from the former Grace United Church (outdoor marker dated 1936) surround the two side walls. We took a seat.

The food is German biergarten fare. Smoked knockwurst, kielbasa, bratwurst, sauerkraut, schnitzels, German Platters and bar classics were on the menu. I had Wiener schnitzel (veal cutlet) with lemon-caper sauce, German potato salad and asparagus ($14.00). The other DIVA had a Bratwurst sandwich with sauerkraut ($10.00). The food was a very Americanized version of German food. It was good, but not as German as I was hoping for.

The craft beer at Atwater in the Park is the star of the show, as it is a fresh alternative to many local small breweries. Since the microbrewery “revolution” that started in the mid 1990’s, the vast majority have produced Ales as opposed to Lagers. There are several reasons for this, which include the ability to create more diverse styles of beer when brewing ales, but most probably is because lagers take longer to create (more expensive) and are generally more difficult to master. What is disappointing with this is the large part of the population that are from great Lager producing countries, in particular Germany. In tandem with that, is the fact that the Metro Detroit area has a very large German population, but has only a few German restaurants. The Atwater brewery locations provide a much needed influx of craft made lagers and German fare.

The Atwater’s beer selection is not locked into just traditional German styles, and they create a wide variety for all types of beer lovers, and includes specialty and seasonal offerings. Any of the beers offered at Atwater can be served in a sample-size pour. Included in this collection are house-brewed Cottonwood Golden Ale, HG Brown, HGP Imperial IPA and Quaker Oatmeal Stout.

Atwater in the Park is laid out with community seating both inside and out, to invite people together for drink, food and conversation. Their main focus is their microbrewery with over 25 Atwater beers available. The food was an American version of German fare. Atwater in the Park opens daily at 11:30 am for the lunch crowd and closes at midnight. The place was impressive, clean and service was friendly. It’s a great meeting place for fun and laughter after work and on weekends.