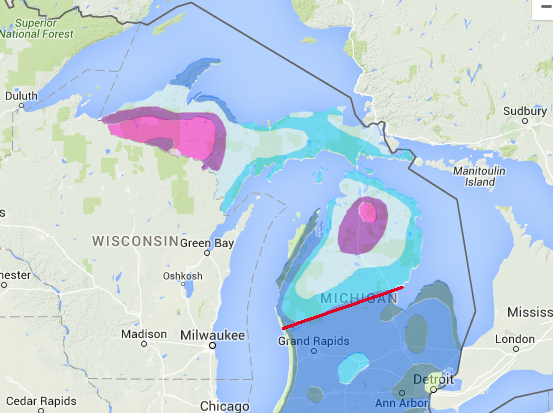 Metro Detroit residents for generations have taken advantage of the state’s rich natural beauty by partaking in the ritual of going “up north”. Most Americans would say “going to the country” or “getting out of the city” but, our state’s geography lends itself to an almost magical phrase of imagery of vast forests, plentiful inland lakes and waterways, bountiful wildlife, and four seasons of varied beauty, all summed up in the simple phrase, “going up north” or Up North – Michigan.

Where Does “Up North” Begin?
There is the obvious psychological effect of being out of the city, and for that we could state it almost begins at Clarkston. It is, after all, more of a lush landscape, and the suburbs seem hours away when visiting Clarkston or driving past that area on I-75. But we know better, there is a long way to go and more variables to consider. We could say there is no right answer, and there shouldn’t be, but we offer three milestones:

Driving past Flint; about Exit 126 or so on I-75. This is the most common description by people of an older generation that traveled up north when I-75 was not a major freeway. If you hadn’t experienced the much slower commute back in the early 80’s and before, this won’t make too much sense, but getting past Flint was a bit of an undertaking back in the day.

One of Michigan’s great vacation spots, Frankenmuth, is a journey to a whole different world; the old world, so anything past this, up I-75, definitely seems like you have ventured into a sort of “frontier” beyond the city.

There is a geological line that goes from about Pinconning on a southwest diagonal across the state. You know it when you get there, maybe around exit 190 on I-75. This divides the lower peninsula into two unique environments, with farms dominating south of it, and forests covering north of it. It is even defined by the USDA Hardiness Zones for you gardeners out there. We included the map above with the red line separating the great “Up North Line”.

Most Michiganders venture toward what is called the “Sunset Side,” better known as the Traverse City side. This includes the Traverse City area, Sleeping Bear Dunes, Charlevoix, Petoskey, etc. It is loaded with wonderful resorts, camping, golf, skiing, and many other popular places and experiences that are well known to most Metro Detroiters. However, the “Sunrise Side” is perhaps Michigan’s hidden treasure. This entails normally one of two routes: 1) Getting off at Standish and getting on the old 23 route up the east side of the state through Au Gres, Tawas, Oscoda, and Harrisville among others. You will travel through state and federal forests, passing undisturbed rivers, discover quaint towns, and find yourself enjoying every mile of the drive up toward Alpena. 2) Getting off at Exit 202 to Highway 33 through Rose City, Mio, and Fairview (and sometimes through Lewiston). This route takes you directly through several major protected forests and provides a very relaxing route up to the heart of the northeast lower peninsula, called Up North – Michigan.

For this post, we would like to concentrate on the I-75 to M-33 route, as it is what we are most familiar with and share our favorite stops that we hope you will consider:   Exit 164 (Wilder Road), which takes you through Kawkawlin and Pinconning. Here is the skinny- If you get off at 164, you follow that north and over the course of about 20 miles there are three key stops: The Turkey Roost, Judy’s Pies, and Wilson’s Cheese Shop. You can stop at one, two, or all three of these stops and at anytime take a road directly east to get back on I-75.

The Turkey Roost serves Thanksgiving style meals all year long, and is known to many old-school, up north travelers. The meals are savory, rich, and come very quickly! If you are only stopping here, you can take the road back to I-75 and will be joining at Exit 168.

Judy’s Pies is Michigan’s best Pie Shop. It is small, has short hours, and does not have a huge selection, but that is all in the interest of quality. Check times and days open before you plan on going here… but this is where you get your pies for your up north trip. If you are ready to head back to your journey, you hop on the road there east and will join 75 at Exit 173.  But if you want to go to Wilson’s Cheese Shop, you head north a few more miles.

Wilson’s Cheese Shop is the place to buy artisan cheese, smoked fish, local wine, homemade mustards, jams, and many other specialty items for your trip up north. Pinconning used to be loaded with cheese shops, but this is the primary one left. They have a tasting counter and are very helpful with recommendations. From there, you can hit the road east and catch 75 at Exit 181.

Exiting I-75 at 202 – Rose City and Mio
There are several gas station/ markets right at the 202 Exit, but we recommend going up about a mile or so to Narski’s Meat Market. There is a gas station there, and a small market, but the bonus is the meat counter that has a nice selection of specialty cuts and smoked meats.

About 15 minutes up M-33 North, there is a small vegetable stand on the eastern side of M-33.  It is seasonal, and you will see many signs on the right side of the road before the stand appears.

In Rose City, don’t miss the small indoor Flea Market that is about a half mile north of McDonald’s.

In Mio, don’t miss the outdoor Flea Market north of town. The main indoor facility burned down, but there are still many outdoor tents full of hidden treasures.

Just north of Mio, if you are lucky, you will see the sunflower farm in full bloom. It is on the east side of the road when heading north, maybe 5 miles north of town.

This will take you into your journey up to many of the amazing destinations on the sunrise side. What makes this part of the state so unique is that most people that have discovered it treat it much like when people move to Alaska—they want the secret to themselves and to be the last one through the door. We, however, hope more people take the time to learn more about the area as it is a wonderland of outdoor activities, resorts, scenic drives, and hidden gem towns and businesses. Here are some of our favorite activities in various towns:

This is one of the most well known golf resorts, but every winter they have magical events that include amazing cross country skiing, but is just as enjoyable as a place to enjoy a winter wonderland getaway.

Fairview: The Michigan AuSable ValleyRailroad. The trips are short, about 20 minutes, but are worth the trip, traveling through scenic northern Michigan woods.

Alpena: A lot to see, and a bigger town than one might think. The glass bottom boat tour of shipwrecks is one of the most underrated activities of up north.

Hillman: The Thunderbay All Season Elk Viewing / Sleigh Ride is something that can be enjoyed year round. Many Metro Detroiters are unaware of where the state’s Elk range is, and seeing the animals on the preserve is awe-inspiring for kids and adults alike. There are packages that include dinners in a log cabin, and they have many packages that include lodging.  Finally, we have always made one of our family recipes before heading up, and it is one of the great traditions that always brings the family together and makes the home or cabin smell so welcoming. We suggest cooking such dishes only when going up north, as smells are so associated with memory. A favorite of ours is a German cabbage soup called Kahlsuppe.  Check out our Recipe section for the recipe.